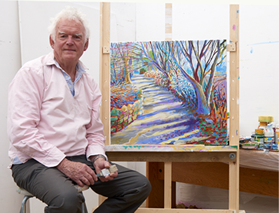 Born in 1942, Alex Williams trained at St Martin's School of Art and The University of Wales. He became an art teacher, later Head of Art, at schools in Hertfordshire before moving to Hay-on-Wye to set up his design and print studio. Moving to the Welsh Border country in the late 1970's was catalytic in his development as a painter of farm landscapes, animals, buildings and agriculture. His work was widely exhibited in the UK and Alex then moved to Los Angeles for three years, exhibiting there and undertaking commissions for Tom Jones and Jackson Browne as well as for magazines and companies.

His images have been widely used in Tableware and Fine Bone China, Limited Edition Prints and Greetings Cards. His versatility also extends to numerous TV appearances as artist and art teacher, in Australia as well as in the UK.

He has exhibited widely in both individual and group shows and his work is in many public and private collections; The National Museum of Wales has purchased a number of his landscapes of the Welsh Borders and he has collaborated very successful with the National Trust on a range of products. 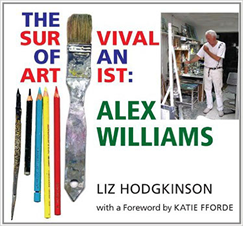